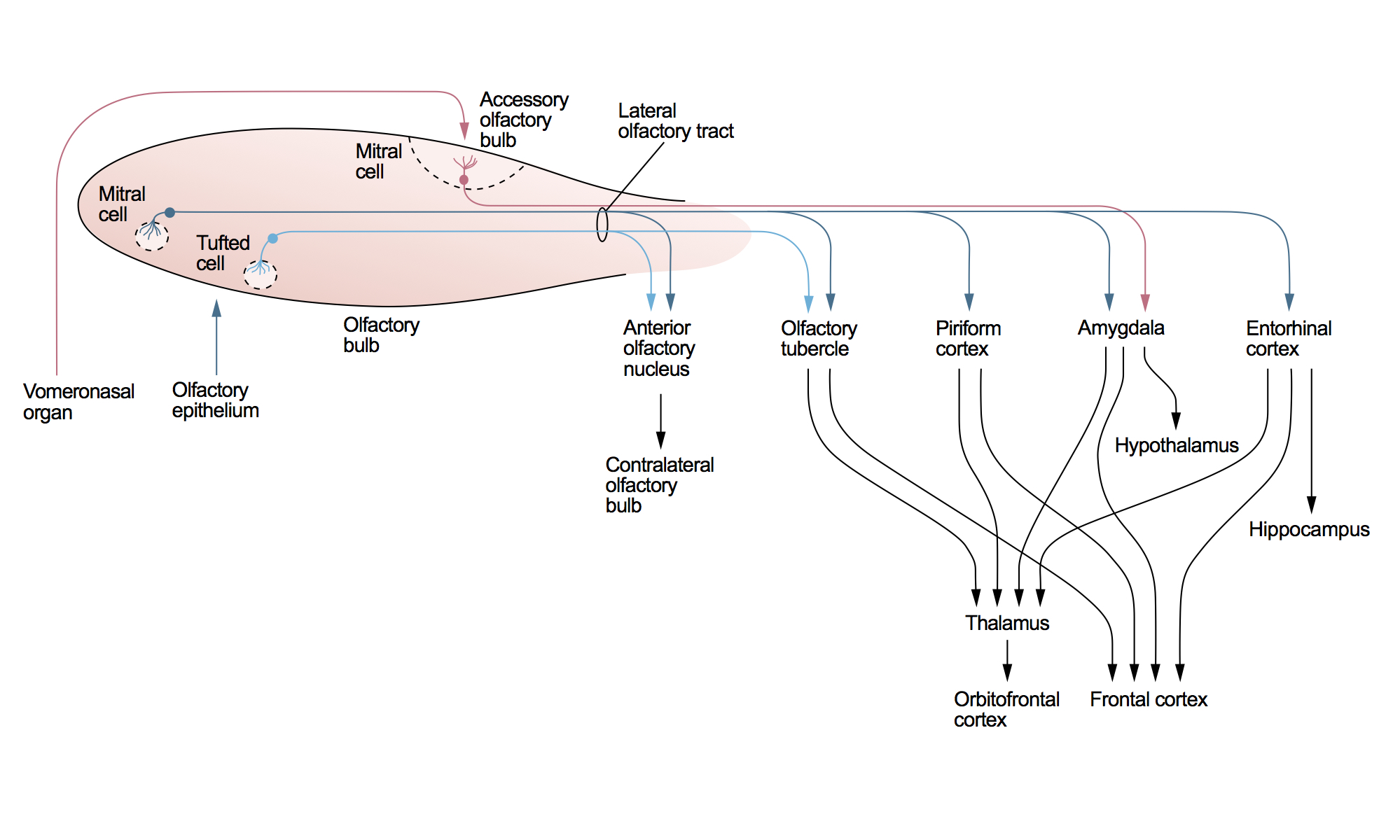 Gill has been collecting visual representations of the olfactory epithelium, primarily from the internet and not necessarily related to intra-nasal drug delivery. Arranging these images into loosely related groups demonstrates the range of possible representations, and also highlights those features, or even individual images, that are often replicated or edited for re-use. Some of the images that Gill has gathered are shown in this blog post.

2D cross-sections of the olfactory epithelium

Many figures show the epithelium in a single 2D cross-section, probably the most straightforward graphic representation to produce. But within this group the visual representations vary greatly, starting with the most diagrammatic examples, shown below: 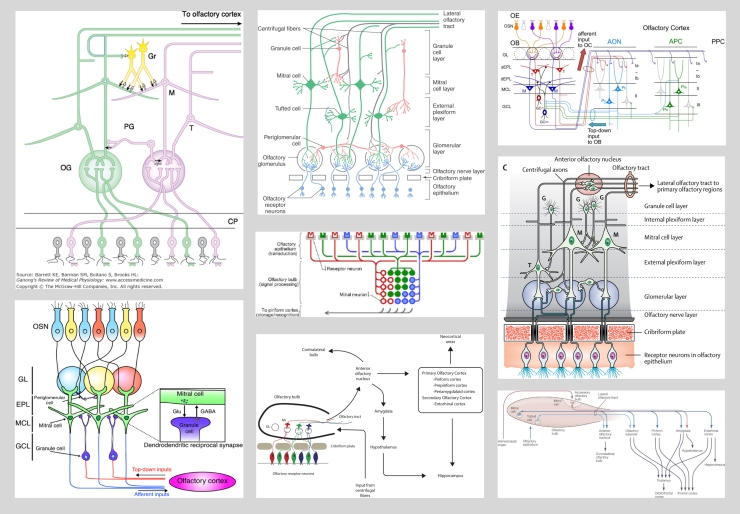 In these figures, anatomy is represented either by relatively simple shapes, often geometric rather than biological, or just by text labels. This reduces human anatomy to the bare minimum, which allows a lot of information to be included in a relatively small figure. The example shown in the header image for this blog post represents the nerve pathway from the olfactory epithelium all the way into the brain. But presumably this diagrammatic approach is only appropriate for certain subjects, e.g. visualising systems or pathways. They bring to mind the diagrams of Eduard Weber, produced as a series of figures in the 1970’s. They were designed to be an aide memoire for German medical students learning the systems of the human body, and so were not required to be anatomically accurate.  Weber’s diagram of the nervous system is shown below: 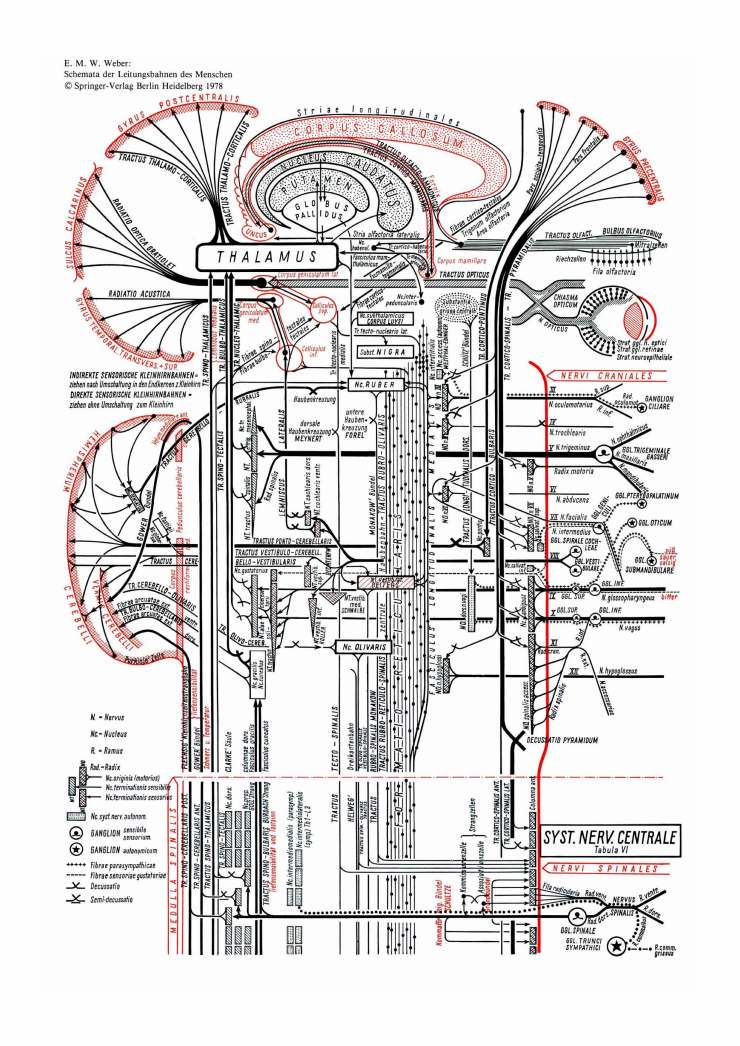 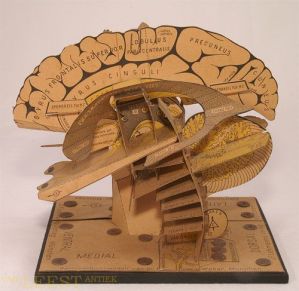 Weber also produced a self-assembly, cardboard model of the brain, purchased in the form of a book and meant to be constructed by medical students. Although it appears to be relatively simple, it was designed to be anatomically accurate. It was first produced in the 1950’s, but remains available today. It would be interesting to know if students of human biology would still find it useful.

Returning to the conceptual figures depicting the olfactory epithelium, we move from diagrammatic depictions to more cartoon-like, and very colourful, representations of the cell types within the epithelium, as shown below: 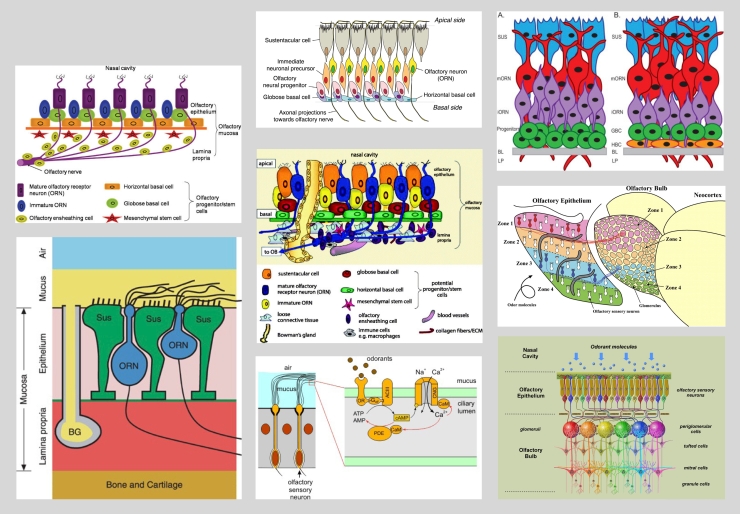 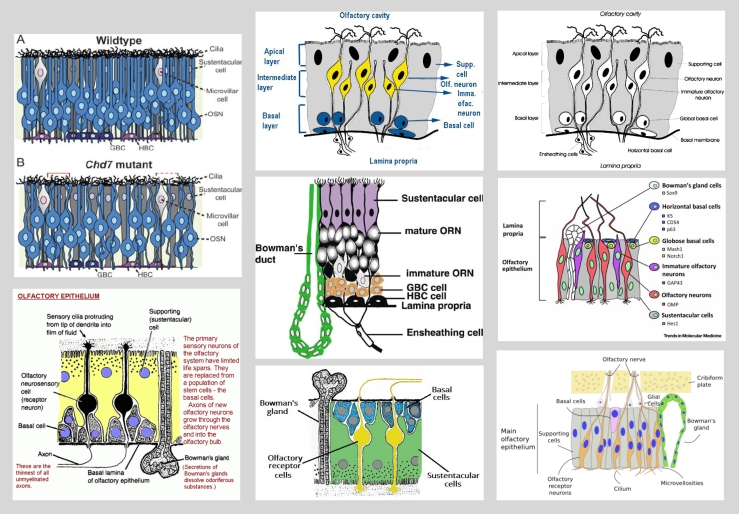 It’s worth noting in the set of examples above that some of the images are duplicated (top, middle & right), albeit using different colours, or shown in a different orientation (bottom, left & middle). This kind of repetition occurs frequently in these images and further examples are shown below. Here the visual representations are moving closer to an anatomical appearance, at least in terms of some of the colours and shadings that are used. 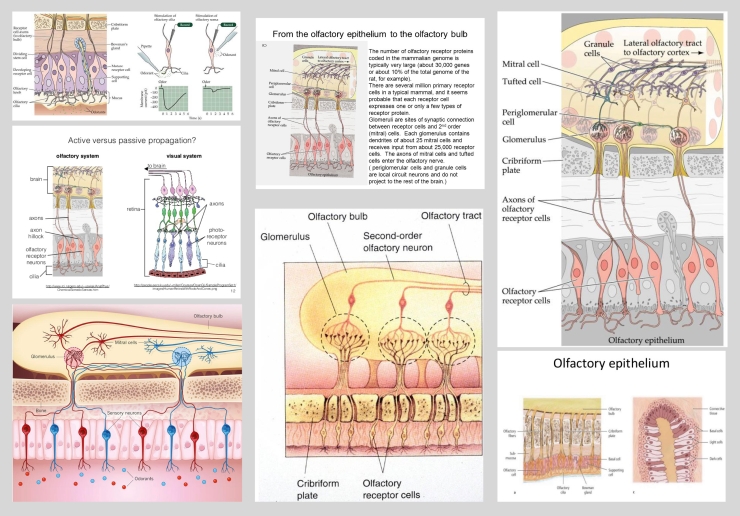 This final set of 2D cross-section images, shown below, lie somewhere between a purely diagrammatic appearance and a more realistic depiction of the cell shapes. 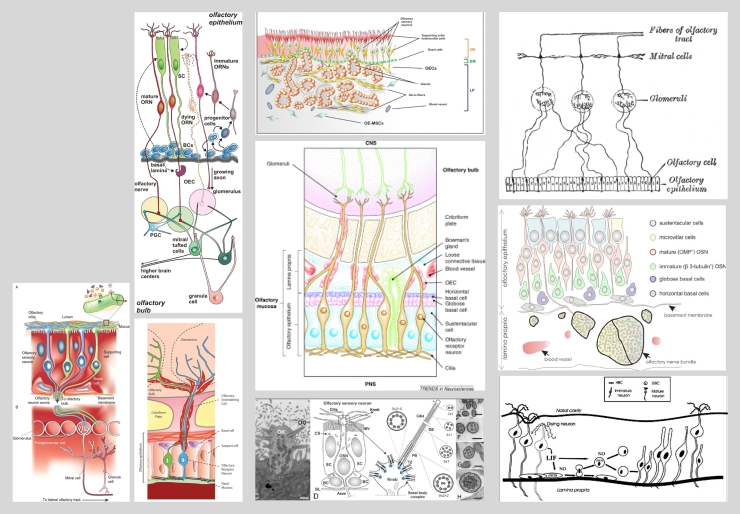 The choice of which kind of visual representation to use would depend entirely on the subject of the paper or presentation. If, however, a scientist has no means of producing their own conceptual figure, they may have to use an existing representation that is less than ideal for their purposes. An image that depicts the true anatomical situation may be too detailed to allow a drug pathway, for example, to be clearly represented.

The olfactory epithelium in the context of the human head

More images were collected that show the olfactory epithelium in context with the human head. Similar images were also collected for rats, but are not included here.

These figures generally show a cross-section of the epithelium linked to an image of the head, face or brain, to demonstrate its location.  As for the cross-sections discussed above, the visual representations vary a great deal in their appearance, with a group of the more ‘anatomical’ figures shown below. 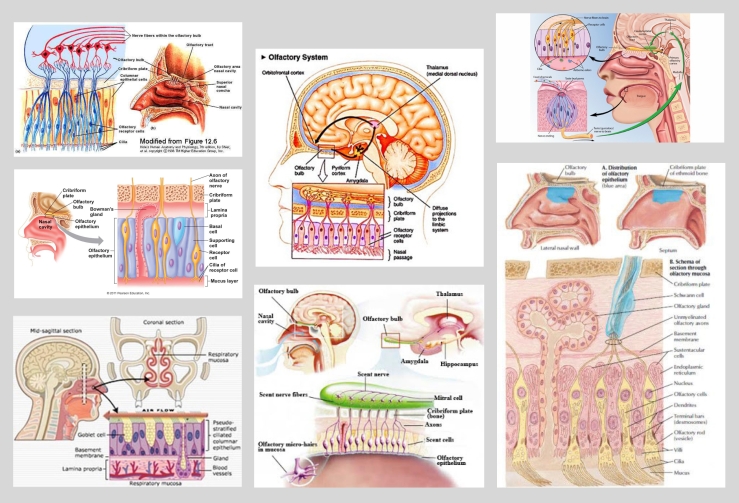 The examples shown below again demonstrate how often figures, or elements within them, are re-used, or possibly copied and then edited. These figures also contain some examples of 3D cross-sections of the epithelium, which were much fewer in number than the 2D cross-sections. This may be because 3D sections are slightly harder to draw. Or it may be that the 3D image does not provide any additional useful information, when compared to a 2D image, and would just over-complicate an already complex figure. 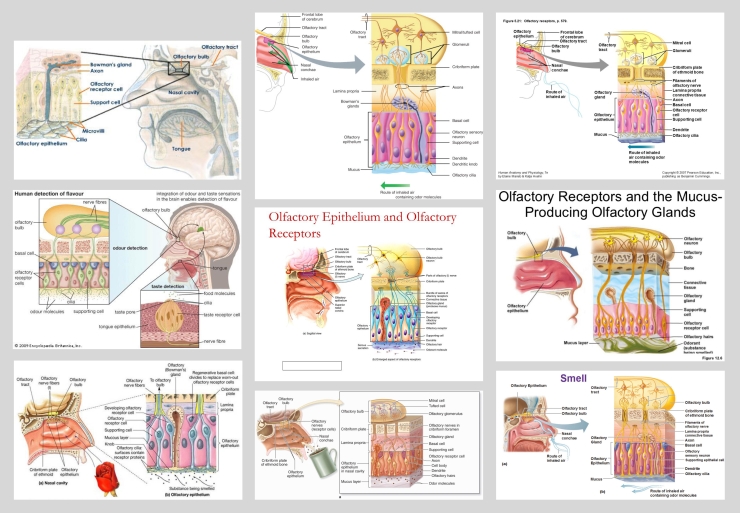 Another example of the repetition of figure elements is shown below, with an image of an olfactory bulb used twice in colour and, perhaps less successfully, in black and white. Some of these figures are also moving more towards a diagrammatic depiction, emphasising the important elements for the subject being represented and abandoning any anatomical accuracy. 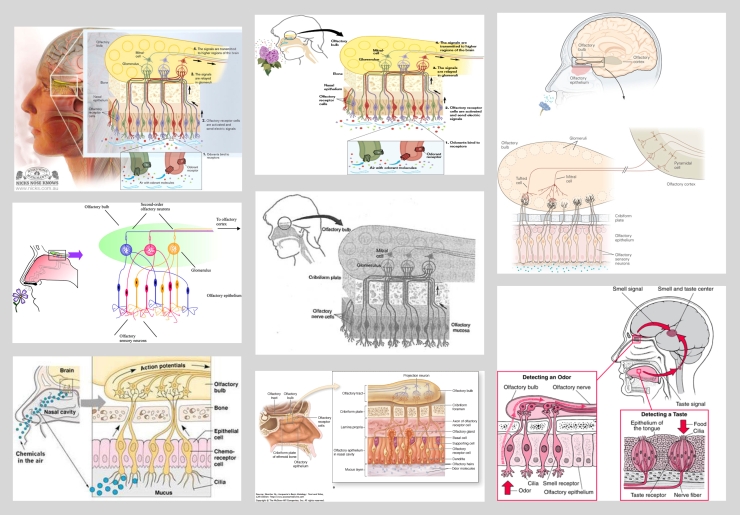 Successfully incorporating two or more images into one conceptual figure is an important aspect of scientific visual communication, particularly when space for figures is at a premium. It is a topic that will be looked at in much more detail during the collaboration.

The olfactory epithelium in Nature

While collecting examples of the visual elements being used by the neuroscientists, Gill has been separating out the figures that have been used in Nature publications. Often the conceptual figures in Nature, particularly in the Review publications, have been produced by an in-house design team, and have a recognisable appearance, mainly due to the colour palette, thickness of line and choice of font. The top six images shown below are typical examples of this house-style. The two images on the bottom row were more likely produced outside of Nature, as conceptual figures provided with submitted papers will also be published, without alteration. However, Nature do offer to re-draw these figures for scientists, prior to publication. 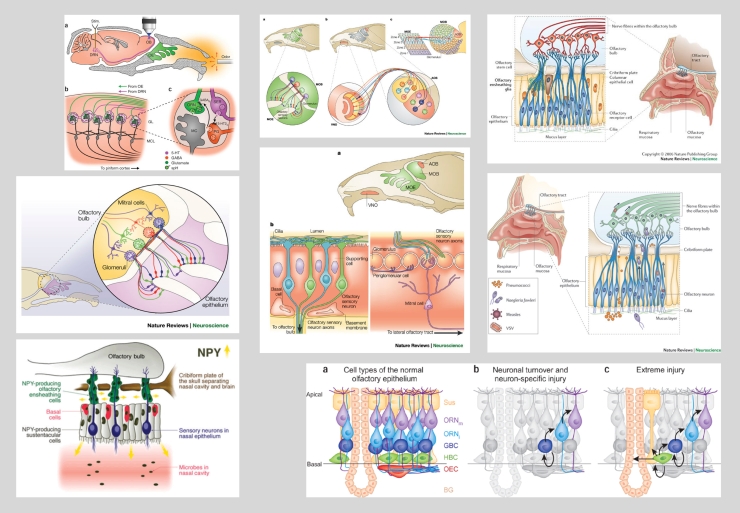 The figures from Nature still demonstrate the same issues as have been discussed for the other images of the olfactory epithelium: the wide range of representations from diagrammatic to anatomical, depending on the subject being depicted; the repetition and re-use of visual elements; the incorporation of several images into one figure.

The topic of Nature, in relation to how they produce conceptual figures, will be looked at in more detail later in this collaboration.

One Reply to “The olfactory epithelium”